Is Covid-19 Impacting Your Organization?

We have video remote interpreting (VRI) solutions ready to provide continuity of services and keep your employees and clients safe.
Please click here and let us know how we can help.

Take Me Out to the ASL-Interpreted Ball Game

Historically, baseball appears to be a Deaf and hard-of-hearing (DHH) friendly game. Umpires make emphatic arm and hand signals when ruling “out,” “strike” and “safe,” while dugout and base coaches relay instructions to players with a series of hand signals. Some claim these visual communications originated in the late 19th-century to accommodate early Deaf players like William “Dummy” Hoy. Whatever their origin, they help put DHH players on equal footing with their fellow ballplayers.

However, less attention has been paid to communicating with Deaf baseball fans. One notable exception is in Rochester, N.Y., which appears on many lists of the nation’s most Deaf-friendly cities and is home to Rochester Institute of Technology’s National Technical Institute for the Deaf (NTID) the Rochester School for the Deaf and baseball’s Rochester Red Wings.

The Red Wings welcome DHH fans to every home game with American Sign Language (ASL) interpreters along the first and third baselines translating pre-game festivities, the national anthem, and the music and announcements during the traditional seventh-inning stretch. With support from Interpretek, the Rochester ball club has provided these services for all 70 home games each year since 2001, and today has closed-captioning on nearly all of its social media and video board content.

In 2019 the Red Wings upped the ante yet again by staging a “Deaf Culture Night” with help from both NTID and the Rochester School for the Deaf. Team uniforms spelled out “Red Wings” in ASL, team members signed “Take Me Out to the Ballgame” for the seventh inning stretch to highlight a silent inning in which all announcements were made in ASL only, and 37 ASL interpreters roamed the stadium facilitating communications.

The evening also served as a stage for the return of former Red Wings employee Ogden Whitehead, who is Deaf and played the role of Recycle Man during games in the late 1990s and early 2000s, while working days in the ticket office. His Recycle Man persona evolved into a local super hero cheerleader—the role he reprised on Deaf Culture Night. “He’s very boisterous,” said Red Wings General Manager Dan Mason. “The fans love him.”

The spirit of Deaf Culture Night was captured for television viewers nationwide in coverage on ESPN’s Minor League Promotion of the Week, and the Red Wings plan to make it an annual event.

According to Mason, the Red Wings initiated its DHH focus in 2001 because, “We realized that a large segment of our population is deaf, and we wanted to do what we could to make those fans feel more comfortable.” He was influenced to start the program by the late Bob Panara, NTID’s first Deaf faculty member for whom the on-campus Robert F. Panara Theatre is named. He was a Red Wings season ticket holder in his retirement and frequently advocated for the Deaf community.

“I had a meeting with (Interpretek President) Mike (Rizzolo), and he said, ‘Lets give this a shot,”’ Mason said. “Here we are, 20 years later still working together. It’s the sign of a great partnership.”

Contributing to the City’s Deaf Culture

“Some fans are pleasantly surprised to see interpreters from Interpretek interpreting on the field,” Mason said. “It’s not something you see every time you come to a sporting event. We get a lot of positive feedback on what they do. And Mike and the whole team have been great to work with. They’re extremely reliable, they show up on time and do an incredible job. We’re very appreciative of our great partnership with Interpretek.”

Long-time Red Wings fan Rizzolo appreciates it as well. “This is a great way for us to contribute to the culture that makes Rochester’s Deaf community so special,” he said. “It also speaks to the generous community spirit of our interpreters, who volunteer to provide this service night after night, year after year.”

It’s one more thing that keeps Rochester high on the list of DHH-friendly cities. 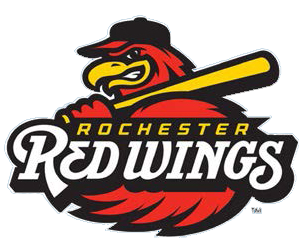 The Rochester Red Wings professional baseball team is an affiliate of the Washington Nationals and competes at minor league baseball’s highest level, AAA, in the International League. Formed in 1877, the community-owned Red Wings are the oldest, continuously operating minor league sports franchise in the United States. The team is known for its clever marketing that reaches many niches in the community to fulfill its goal of providing wholesome family entertainment at a reasonable price. Visit the Rochester Red Wings page to learn more.